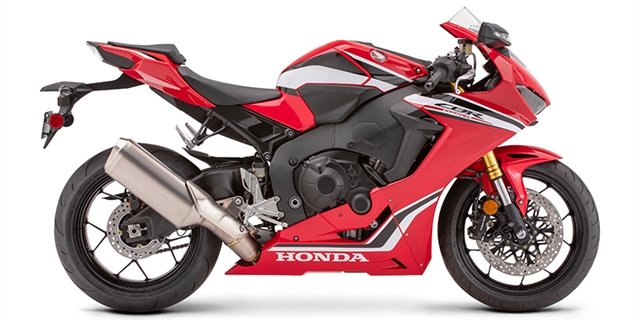 108 people have recently viewed it.
Description

*UNIT HAS NOT ARRIVED AT DEALERSHIP

Open-class four-cylinder liter bikes have long been the holy grail for the best sportbike riders. Powerful, precise machines that stand at the very top of motorcycling’s hierarchy. On the track,
they command your full attention. On the street, they give you a ride like nothing else with a
license plate. And make no mistake: Honda’s 2021 CBR®1000RR and CBR1000RR ABS are two
of the best you’ll ever ride. Spectacular, refi ned handling. Immediate, absolute power. And all
in a package that off er’s Honda’s legendary quality, and a level of comfort and rideability no
racebike can match. Machines like these are a rare breed, and so are their riders. But once you experience a CBR1000RR, it’s hard to be truly satisfi ed with anything less.

Featuring high-compression 13:1 pistons, the CBR1000RR revs like only a flat-plane inline-four can. It also makes ten horsepower more than our previous generation of CBR10000RR.

With Honda Selectable Torque Control (HSTC), we’ve got your back, but you’re in control. Here’s how it works: The system automatically adjusts engine power and grip to optimize torque at the rear wheel, reducing rear-wheel slip. You get your choice of five power curves, ten torque-control levels, three engine-braking levels, and now three selectable levels of wheelie control so it’s easier than ever to dial your bike in at the track.

The CBR1000RR's throttle-by-wire system works in concert with our Honda Selectable Torque Control. With the two, you get your choice of three engine power-delivery modes, plus two which you can custom program yourself.

Almost a full pound lighter than our previous generation, the CBR1000RR sub-frame further refines our mass centralization efforts. Light is always right, and this is the lightest CBR1000RR we’ve ever produced.

The CBR1000RR is much slimmer than previous models in the tank/seat junction area, and also in the upper cowl (more than 24mm trimmer). This improves aerodynamics, and the narrow tank makes it easier to tuck in.

TFT means an instrument display that’s lighter and easier to read than previous LCD designs. It’s a first for Honda, and it’s made its premiere on the CBR1000RR.

Superbikes can deliver a great deal of back-torque through the driveline, upsetting handling—not the CBR1000RR models. Its Honda-designed assisted slipper clutch is the same type used on our MotoGP bikes. The design does away with the need for heavy clutch springs, ensuring full power transmission with smooth shifting and a light clutch pull at the lever.

Almost an inch narrower than on our previous-generation CBR1000RR, and featuring a high-density core. Plus the radiator tucks in tighter and cools just as efficiently.